Can You Judge a Book by Its Cover?

What do the Bible, Mein Kampf, Harry Potter, Lady Chatterly's Lover, Doctor Zhivago, Grapes of Wrath, and Alice in Wonderland have in common? Well, for starters, they've all become classics. But they also have another common link. At one time or another, someone sought to ban them.

The cover in question is on Island Sting (Leap Books, January 2010). Doerr, a former Science teacher, planned her fast-paced eco-mystery series for classroom use. Each book in the series features a different endangered animal and is accompanied by lesson plans for use across the curriculum. Doerr, who won a NOAA (National Oceanic and Atmospheric Administration) grant for her first book to be used in environmental education, did in-depth, on-location research for each book, and many educators have praised the book’s content.

But will her new, edgy cover mean that rather than supplementing the science curriculum, the book will be banned by schools?

If some teachers have their way, it will. 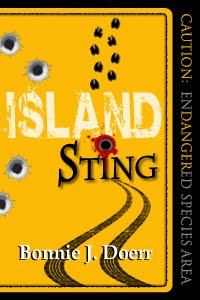 The teachers’ objections? Bullet holes and blood. Some cited school shootings and violence as a reason for not wanting this book in the classroom.

No author wants a reputation for promoting violence. But what if the book in question is about violence? In this case, a poacher is killing the endangered Key deer. The background of the cover is designed to resemble the Caution: Endangered Animal Area signs found in Key West, Florida, the book’s location. The bullet holes suggest the danger as do the swerving tire tracks and fleeing deer tracks.


So the cover seems appropriate for the subject matter. And Leap Books queried teens about the cover and found it particularly attracted the interest of teens who indicated that they rarely read. Here's hoping teachers recant and select the book for its content. They might be pleasantly surprised to find reluctant readers snatching up the book. And isn't that every teacher's goal--to get students to read more?

Any sort of censorship is dangerous, a slippery slope that drags us all down and traps us in its sticky web. Teachers should trust their students, and challenge them to look past the cover to what the story represents. Making them sensitive to the issue at hand will not encourage it, but hopefully prevent it. Isn't that what education's all about?

Great topic - very thought provoking. As an employee of a school district, I find that most teachers and librarians exercise good judgment and probably wouldn't object to Ms. Doerr's book.

But the reality is that we live in a divisive society where those on both ends of the political spectrum are vocal and litigious. Parents on the left become apoplectic upon seeing a copy of the Bible in our library and those on the right fear that Harry Potter is a scheme to indoctrinate their children into serving Satan.

What are reasonable people supposed to do?

Schools have become hypersensitive, because it's not worth going to court or possibly losing a job. As a result, students get stuck with one flavor - plain vanilla.