Sometimes, being a writer is all about balance. Balancing work and life, balancing a full-time job and writing, balancing the things you want to write and the things you have to write. I work full time as a school counselor, and in my "free time," my writing projects include articles on spec and on assignment, along with the projects I want to work on, and assignments for a writing class I am taking.

For better or for worse, I am mood-driven in my approach to my writing; I tend to work on the projects that appeal to me in the moment. As long as I keep deadlines posted on paper and/or in the back of my mind, my approach works fine ~ in fact, it works quite well because I write better when I'm focused on something that appeals to me.

George's blog yesterday focused on a similar kind of balance ~ the balance between pleasure and responsibility. Simply by taking his laptop out into the warm sunshine, he managed to achieve a balance between two things that can be so contradictory.

And so it is with my mood-driven writing. By focusing on the project ~ or a part of it ~ that is my heart's desire, I bring my writing out into the sunshine. It doesn't happen every day, or with every bit of every project, but when it does, the writing just flows and everything is easier.

It's Perfect Weather to be a Writer

These words are being composed on my laptop. Me and my laptop are in the backyard, under a maple tree. It's a perfect weather day, and it's a perfect day to be a writer.

I am just fine tuning chapter two of my next book. It's just being tweaked.

My laptop is WIFI compatible, and it's talking to my wireless router, giving me complete freedom to be outside as I write, but keeping me connected to the world via the Internet. Technology is just too cool.

One of the questions I get asked often is 'why do you write?'

My reply has been, "Because I must."

If I were asked why I write today, I would likely say, "It's a perfect day to be a writer."

Email ThisBlogThis!Share to TwitterShare to FacebookShare to Pinterest
Labels: writing

What's in a Name?

Have you ever read a book where the name of the characters stuck in your head long after you finished the novel? Like hearing a song on the radio in the morning and then carrying it in your head all day long even when you try to forget it. Naming a character can be very important for making a lasting impression with readers.
I don't know about other authors, but I brood over characters names each time I start a new book. Especially in fantasy fiction, the name of a character should inspire an image of who and what that person is. For instance, if the name of a character is Morag, the reader isn't going to be expecting this person to be the hero of the tale. Morag, sometimes spelled Mhorag, is a monster in Scottish folklore.
In my fantasy series coming from Medallion Press, I've used many names from folklore and mythology for characters and beasts. Bayard is the war horse ridden by the male protagonist in The Chronicle of Futhark. In folklore tales of medieval France and Italy, Bayard is the name often given to Charlemagne's immortal horse. Bayard was faster than a normal horse and perhaps possessed of other magical abilities. Though the horse in my book isn't enchanted in any way, he is quite special.
A Gorgon is a monster for a variety of monsters from Greek mythology and perhaps with some Roman influence. I changed the name a little and endowed one of my monsters with the moniker of 'gordragon.' It's a rather enemy.
As a reader, do you assume certain images from a character's name? As a writer, do you spend long hours considering names for all the persons and creatures appearing in your works? Has a particularly clever name used in a literary work made a lasting impression?
Posted by Susan Gourley/Kelley at 1:15 PM 1 comment:

You Can Write With Just a Pen and Paper

I just finished reading a profile of Elmore Leonard in the July/August 2009 issue of AARP Magazine. It's a great article about this prolific writer.

One of the things that fascincates me is that Elmore doesn't use a laptop or desktop computer to compose his prose. He uses a ballpoint and a yellow legal pad. He said he can’t imagine typing words on a screen. When he finally has a handwritten page the way he likes it, us then puts it on an IBM Wheelwriter 1000.

Elmore is known for giving writers the advice, "Try to leave out the part that readers tend to skip."

My favorite lines in the artile was at the end: “After 58 years you’d think writing would get easier. It doesn’t. If you’re lucky, you become hard to please. That’s all right, it’s still a pleasure.”

Would Some Booze Help You Write?

The other day I ran across an interesting tidbit about those folks that work in the media. Now this information is for our comrades across the great pond. It seems like those of us in the media field like to drink - about double that of regular, non-media folks.

Media workers are the heaviest drinking professionals in England,
consuming the equivalent of more than four bottles of wine or more than 19 pints
of beer a week, according to government research.

People in the profession drink an average of 44 units a week,
around double the recommended limit, a Department of Health survey
finds.

The source for this information is here:
http://www.guardian.co.uk/media/2009/may/24/media-workers-drinking-habits

There is no such study -- yet -- for Pennsylvania writers and in particular, those of us in the Susquehanna Valley. I suppose some of us might enjoy some wine while we write and prepare our prose. Others might choose a smooth brew or some other adult beverage.

It's good to know that I now have an excuse to partake. I can blame it on my profession. And lately, there have been plenty of reasons to want to forget what has been happening to freelance writers.

With newspapers closing, magazines going out of business, book publishers offering pathetic advances, the markets for working writers is as bad as ever. And that's a good reason to drink, if you really need a reason.

-- George Sheldon, www.georgesheldon.com
Posted by Anonymous at 9:46 AM 1 comment:

Release day for Liberation via Pen!

Here's the story excerpt:
They talked about their aspirations as the steam evaporated from their cups. Krista confessed her literary insecurities while admiring the black flecks within his grey irises; eyes that invited close inspection. His lips likewise taunted her, whether involuntarily or not. She couldn’t tell if he intended to tease, or if he was just being nice. She hoped the former. Nice guys tended to bore her. 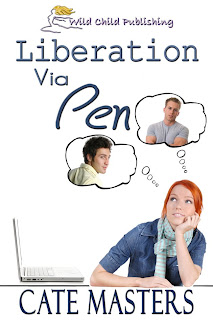 Todd set his gaze on her. “Follow the age-old creed–write what you know.”
Krista took the advice to heart, literally: what she’d known for the past two years was Ethan. She’d let him infiltrate her life, her apartment, her thoughts, herself. Thinking his invasion was laying the groundwork for a future, she’d dated him exclusively, rearranged her life to accommodate his likes and dislikes until she could no longer remember her own.
She wrote to rediscover herself, divine her innermost thoughts and feelings. From their seemingly serendipitous meeting to their breakup, Krista chronicled and dissected their relationship, building to the crescendo of their eventual fall.
She copied the first five pages for the critique group the following month. The chick lit writer said: “Your dialogue’s too stiff; make it sound more realistic.” “Make your prose more lyrical, but get rid of the adjectives and adverbs,” offered the poet. The mystery writer advised: “Foreshadow your events to build suspense.”
Krista nodded, noting each writer’s advice for her revision. She spent the next two weeks pouring over each sentence, mercilessly slashing words, constructing setting and scene, the cadence of her prose flowing lyrically. Like music, the words streamed luxurious legatos punctuated with sharp staccatos as demanded by the scene. They lifted her spirit, excited her neurons in a way that made her hunger for more. The high of writing a well-structured sentence was addictive.
As a bonus, certain aspects of her former relationship came clear. Ethan lived on the cutting edge of pop culture, always had to have the latest gadget, widget or gizmo. He was exceptionally good with technology. With people, not so much. Had she possessed the foresight to commit his faults to paper earlier, Krista might have been spared much heartache. The exercise allowed her to see, finally, that Ethan was an ass. By setting her emotions into words, she not only defined them, but her writing informed her self-definition.

And here's the trailer:

Cate Masters’ novellas, short stories and flash fiction appear at various web zines and press sites. Visit her online at www.catemasters.com or catemasters.blogspot.com
Posted by Cate Masters at 5:15 AM 5 comments:

Two of my books from two different publishers are out today!

My YA biography, Rihanna (People in the News) is out from Lucent and Summer Lovin’, a YA anthology of summer love stories is out at The Wild Rose Press.

You can check out the blurb for my story, “Summer Storms,” as well as those from fellow authors at the Climbing Rose blog: http://twrpclimbingrose.blogspot.com/. The e-book is available for purchase at http://www.thewildrosepress.com/summer-lovin-p-1249.html. Print release will be 7/10.

Rihanna’s up for sale at Amazon:

SUMMER LOVIN’ is a collection of love stories by six Climbing Rose authors about life on a ranch, summer jobs, sandcastle competitions, the tragedy of a flood, and falling in love with a rock star. My story is in the anthology is "Summer Storms": Sixteen-year-old Paige nearly drowns trying to rescue a Pomeranian trapped in floodwaters that sweep through her town. Chase, the hottie who saves her, wants to help her and her mother, but Paige won’t accept charity. And can she risk him unmasking the family secret she’s kept hidden?

RIHANNA (PEOPLE IN THE NEWS) tells the story of R&B singer Rihanna, who loved to sing as a child, but had a rough homelife with a cocaine-addicted father. Discovered at age 15, Rihanna auditioned for Jay-Z and rose to stardom. My book offers a behind the scenes peek into Rihanna’s childhood, her rise to fame, her Grammy win, and some of the celebs she’s connected with, including Shia LaBeouf, Timbaland, Maroon 5, and Chris Brown.

Anyone who comments at my blog http://lje1.wordpress.com/ or friends me on MySpace, Facebook, or Twitter from now until May 31 will have their name entered to win a copy of Summer Lovin’. Winner will be announced at noon on June 1, so stop back to see if you've won.