Cate: Please welcome Toni V. Sweeney to the Susquehanna Writers blog! Toni, will you please share a short bio with us?
Toni: Thanks, Cate. Let me say I’m glad to be with you today. Let’s see, what to say? I’m a Southerner, born in Georgia but I’ve lived in the South, the Midwest, and on the West Coast, so I’ve been in a variety of geographical locations as well as witnessed several of Nature’s most powerful forces—tornadoes, blizzards, forest fires, and earthquakes. 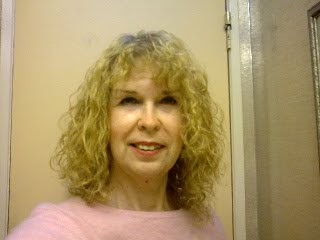 Cate: Tell us about your latest release and where it's available.
Toni: My newest novel is Serpent’s Tooth, my own version of Faust. Technically, it’s a horror novel but I like to mix up the ol’ genres so it’s also a love story.

Cate: I love mashing genres! Please tantalize us with a story blurb or excerpt.
Toni: The excerpt’s a bit long but it sets up the rest of the story nicely. Here’s the premise: Melissa Powers is on a Caribbean cruise when she notices another passenger is following her. Everywhere she goes, he’s nearby. That night, at dinner, they finally meet:
The waiter was bringing the dessert tray.
Melissa turned her attention to the desserts. Fresh raspberries with cream, cheesecake, strawberry tart. Which to choose? Which delectable confection to treat her sweet tooth? 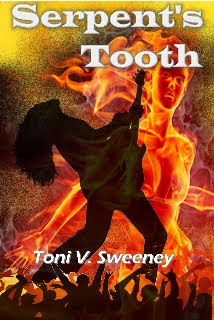 Cate: Intriguing! Love that cover too. What inspired you to write about the theme?
Toni: Surprisingly enough…a dream! I had a dream one night and remembered nothing about it except one name. Hildebrand. The next day, I was watching an old movie on TV and one of the characters was named Hildebrand. I have a rule that if some idea stays with me for three days, I’m supposed to write about it and with the coincidence of that name in two days, I decided that was some kind of sign that I was supposed to use that name in a story.

Cate: How do you develop your plots and characters?
Toni: Anything can trigger it. As I said, a name… or a place. A movie or a TV show whose ending I didn’t like. I might decide to write something similar with a different ending or take something a character suggested which wasn’t followed up in the story and expound on it. A quotation…lots of things. Once the story starts, the characters and plot just seem to develop from it. Sometimes they just grab the story and run away with it, dragging me along behind!

Cate: Do you feel as if the characters live with you as you write? Obviously, they haunt your dreams!
Toni: (laughs) I have quite a few characters whom I really like and I could take the novels already written about them and just keep adding to them. I have two characters I’ve watched travel from young adulthood to being grandparents and written 5 books about. I grew up with them and they and I matured together. If I wrote about them now, their characters would be different from what they were originally because they and I are now older. Needless to say, they are my two favorite characters.

Cate: What's next for you?
Toni: Well, I have two pseudonyms, so I doubt I’ll be idle whether it’s writing for myself or for them. Currently, I’m alternately writing novels for myself and Icy Snow Blackstone, who is my romantic author-alter-ego (try saying that fast!) Mine, of course, is a fantasy and Icy Snow’s is a futuristic novel (and also one I said I wouldn’t write), a sequel to Three Moon Station. So far, I have one-third of the books written, The plot came to me one night as I was trying to sleep and thinking, “What am I going to write about next?” And—BONG!!!—it hit me, Three Moon needs a sequel. A fan had already written and asked if there would be one and I had said “No.” Now, my brain was making me out to be a liar. I started on it the next morning. For myself, I just finished Blood Bay, which was a novel I started around 1993 and then lost after I had done one chapter. Recently, an acquaintance whom I hadn’t heard from since that same year, found it in his computer and sent it to me. I finished it, updating it from 17 years ago, and entered it in the Amazon Breakthrough Novel contest. It’s a departure from my usual writing in that it’s a suspense/romantic thriller set in the Golden Isles off Georgia’s coast.

Cate: Cool! Any other published works?
Author: How much time do we have? I’ve got published works and then some! (Laughs at her own wit.) Between Icy Snow, myself, and my other pseudonym, I have 17 books currently out there. My first efforts were in various genres until I “found my voice.” Now, I write sci-fi/fantasy adventures, Icy Snow writes romance of all types, and my other persona writes horror/vampire stories.

Cate: Seventeen - congrats! Describe your writing in three words.
Toni: You’re asking a writer to use just three words? Let’s see…intriguing…sexy…outside-the-box (Can that last one count as one word?)

Cate: What’s the most interesting comment you have received about your books?
Toni: A reviewer of my vampire novel Murder in Old Blood said it was the best of its type she had read since Interview with the Vampire. That really floored me because I didn’t expect such praise.

Cate: Who are some of your favorite authors and books? What are you reading now?
Toni: I like Nora Roberts, writing as JD Robb. I like the interaction she has between Eve Dallas and Eve’s Husband Rourke in the “in Death” series; Jim Butcher, his Harry Dresden is a character that grows through the stories, his life changing and not staying static from one story to the next; Bram Stoker, he did write novels other than Dracula; Tony Richards, whom I like to count as a friend. At the moment, I’m reading Christietown by Susan Kandel. She writes books about an author who write bios about mystery writers. This particular one centers around Agatha Christie, hence the name. The first book of hers that I read was I Dreamed I Married Perry Mason.

Cate: Where can you be found on the web?
Toni: My website is : http://www.tonivsweeney.com.
I’m also on Facebook and My Space and have trailers for most of my books on YouTube.

Cate: Is there anything you’d like to ask our readers?
Toni: Yes—why aren’t you out there buying my books? Just kidding. If there are any questions your readers would like to ask, however, I’ll be glad to try to answer.

Cate: Thanks again for being our guest, Toni! Best of luck with Serpent's Tooth.

Toni, that excerpt was fantastic and I am sorry it was so short. It really grabbed me!
It sounds like an I have to read story. Immediately I have to know why he stopped everything!

The excerpt sounds interesting and the cover is dynamite.

What a great excerpt, Toni. This release sounds exciting and intriguing. Best wishes on its success.

I agree! Wow, and best of luck.

Congrats on your release next week. I love the Faust story...someone selling their soul to the devil never gets old:)

Wow, Toni, all those years ago when we were at good old Mercer U, who'd have thought you and I would both put in time living in COLD country!

You always did have quite an imagination and we did have the best English professors.

Very intriguing! Thanks for sharing the excerpt with us. You definitely know how to end with hook to keep readers going.

So glad you could pop by the Susquehanna Writers blog. Best of luck with your release!

Your brain called you a liar? Too funny, Toni. You are an incredibly busy author. Glad to have you in the Class Act Family.