Dead to Rights is available from Decadent Publishing! 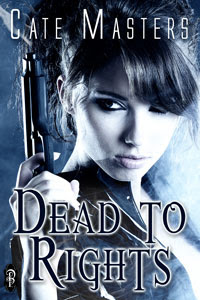 I should actually say re-released. You may remember I self-pubbed this novel last year. But I wanted it to reach a wider audience, and Decadent's editors helped me polish it up a bit.

This story's a little different. Although it contains a little sexual tension, it's not a romance, but more along the lines of an urban fantasy. I'm never quite sure of the distinction between dark paranormal and urban fantasy, so I'm going with dark paranormal because of the demons, warrior angels and a mixup of souls. There's some violence and graphic language, so the heat level's bumped up because of that.

I'm even more excited that Decadent's wonderful editors were so enthusiastic about this story, a few asked about a sequel. The ending is open to it, and I'd love to write an interrelated set of stories about the various warrior angels -- eventually. I have a dozen or so WIPs I need to finish first. :)

I'm loving Decadent Publishing. They also arranged for a blog tour for Dead to Rights, so look for news of that, but probably not until May.

Wow, I can't wait to read this. It sounds great.