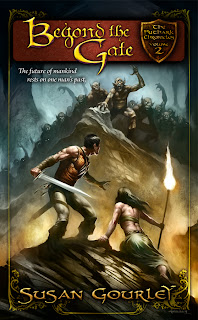 Nothing makes me put down a book faster than card-board characters.  If they're so normal or so cliche, how can I care what happens to them.  Characters makes a story memorable.  So how does a writer give their hero or heroine depth?
A hero can't be all-knowing or all powerful.  They must have vulnerabilities and often that weakness is their secret.  Perhaps only one other character, perhaps the antagonist, knows this secret allowing for all kinds of difficulties.  That secret could be a past sin or shame, something that makes the hero sad, frightened or embarrassed.   This secret can drive the character toward some goal or provide the motivation for his actions.
As the character takes action towards his goal, the more specific the goal the better, his secret will color his choices, his relationships and slowly reveal his weakness.  And what better way to hone the character but to put his tight spots.  He'll reveal himself through how he acts when he's desperate.  Frustration will show his character so keep the pressure turned on high.
Some characters earn a reader's interest by their quirkiness or contradictions.  Can they be cruel and funny? Can they be shy but also rude?
In my new release, Beyond the Gate, Book #2 in The Futhark Chronicles, Cage's secret is revealed to all though he doesn't realize those who love him understand his vulnerability.  Cage's birth mother abandoned him when he was a child.  He believed he's unlovable and constantly risks his life in an attempt to be earn that which he secretly thinks is unattainable.
Reviews for the first book in this series, The Keepers of Sulbreth, have the highest praise for my characters.  I hope you'll try them out.
What character have you read that you find unforgettable? What made that person do memorable?
Posted by Susan Gourley/Kelley at 7:23 AM

Email ThisBlogThis!Share to TwitterShare to FacebookShare to Pinterest
Labels: Beyond the Gate, Character development, Susan Gourley, The Futhark Chronicles, The Keepers of Sulbreth

This is great, Susan. I like this line best: "Some characters earn a reader's interest by their quirkiness or contradictions." So true. SO true, there are a couple of YA book where I couldn't stand the MC in the beginning and grew to love them in the end!

I know what you mean, Christina. I think the quirky and contradictory aspects appeal to teen readers because they feel they're that kind of person.

So true, Susan. Predictable characters are boring. My favorite are flawed characters who redeem themselves.

You're so right, Cate. I also like characters who learn to accept their flaws or those of others.

I endeavor to create three dimensional characters in my books for any of the main characters. It is a struggle sometimes, but well worth the effort.
Nancy
N. R. Williams, fantasy author

The more off-beat the protagonist the better. A three-eyed protagonist is much more enjoyable to read about than your average, everyday cookie-cutter, two-eyed man/woman. And they have a wider range of vision.

where and when will your print copies be available?

I'm not sure when I'll have print copies of this book, Tina. My publisher has decided to go with ebook only for the first few months after release. I'm not happy about it but I'm helpless to do anything. Thanks for stopping by.

Great blog, Susan. It's up on my blog site as well. Good luck with the new book. Looks awesome!

Thanks, Jon, for stopping in and especially for letting me guest on your blog.