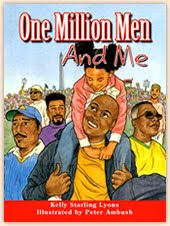 Today we're hosting a former Pennsylvania author, who is heading back to the state to do a program in Pittsburgh. We were lucky enough to catch award-winning author Kelly Starling Lyons as part of her blog tour leading up to the 15th anniversary of the Million Man March. Kelly's book, One Million Men and Me, will be featured at several events in addition to the blog tour. Here are a few of them:

To celebrate the Million Man March (October 16) and the National Day of Writing (October 20), the August Wilson Center for African American Culture, Reading is FUNdamental, and Just Us Books sponsored an essay contest for students in first through fifth grade. They were asked to write about a special moment with their father or father-figure.

Winners will be announced at 6 pm, Monday October 16, 2010. Award-winning author Kelly Starling Lyons will present a program about her picture book and the Million Man March. Event is free and open to the public.

For a great lineup of posts on interesting facts about the march, visit Kuumba, Kelly's blog. Get a sneak peek into her childhood and find out why she became a writer at Laurie Edwards blog.

Great to have you in PA, Kelly!

Thank you for sharing information about my blog tour and upcoming events on your wonderful blog!