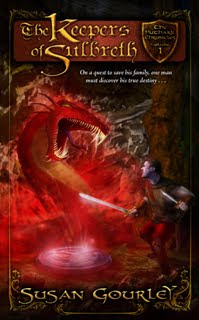 This Sunday, I will deliver my third and youngest son to his first year of college. He's the mature independent sort and handles stress with an ease I envy. I'll know he'll be fine, but it's still difficult to send another child out on his own. I've done what I can for him. Hopefully he'll remember his manners, his responsibilities and shine all on his own.
I can't help but compare this to the day I have planned for next week. My publisher, Medallion Press, sent me an entire stack of cover flats. One day next week, I'm going on the road to all my local bookstores. I'm going to introduce myself and hand them a cover flat with all the information on for retailers to order my January release, The Keepers of Sulbreth. I'm also going to send cover flats to some independent book stores I know of that are out of driving range.
I remember being nervous sending out that first manuscript. It was very much like watching my oldest son walk in the school door on his first day of kindergarten. There was so much insecurity. Was my son ready? Was my book ready? Turns out my son was but the book needed a lot more work. LOL
Now I'm trying for the next step. Now I have to sell myself in person to those booksellers and convince them to take a chance with their precious shelf space. Hopefully a few will even take a chance on a book signing in January. I'm more nervous about this then sending my eighteen year old to a college many hours from home. I'm sure he's ready. Now I need a little of that confidence myself.
Are there other suggestions out there of places to drop my cover flats? Have any of you talked to bookstores in preparation of your book's release? Does a personal visit convince them to order your book? How much say do local managers have in what fiction books end up in their store? I guess I'll find out.
Posted by Susan Gourley/Kelley at 6:48 PM

Congrats on your milestone moments Susan! Sending either one of those babies out into the world is tough! Your son will shine, and so will your novel! You've polished both a long time. Wish I had better advice on the bookstores - I could use some myself! But walk in there with confidence that your book can help their store's sales, and don't take no for an answer!

Thanks, Cate. I'm going to try for that confidence. I'll let you all know how it works out.

Best of luck with this, Susan! And isn't it wonderful to have another "baby" to occupy your time when the last one heads off. I know you'll do fine. And the cover's very enticing!

Thanks, Danni and Lily. I do love my cover and like so many writers who also work a full time job, I have so much to occupy my time I'll never think about that empty nest stuff.