The lesson of the boot print

One morning this winter, I came in the house after some mundane chore and bent to remove my boots. Afterward, this was what was left on the floor. 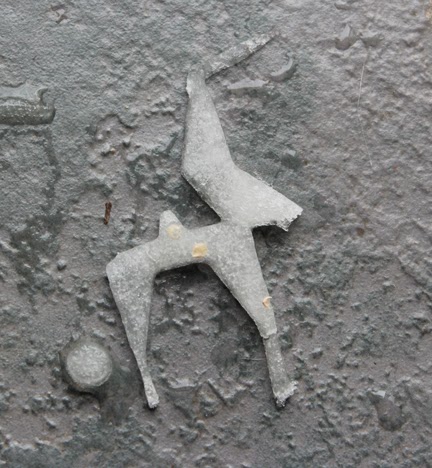 An antlered deer! Or maybe a chupacabra? With a saddle? (Don't ask me what that ball-shaped thing is behind him, lol)

In any event, I thought it looked pretty cool. So I grabbed my camera because I knew it wouldn't last long.

Sometimes like story ideas. They flash through my head. Sometimes, I'll write them down while they're fresh and capture them. Other times (if I'm somewhere I can't jot notes), I'll keep repeating it in my head in hopes I don't lose it.

Sometimes, though, like the deer/chupacabra, it melts away. *poof* Gone, and once that happens, it can be gone for good.

Another lesson to apply to writing - get it down while it's fresh, and the image is clear.

A deeper lesson is to stop and look in the first place. There's so much we miss on a daily basis because we rush, rush, rush. It's worthwhile to stand still and look around. Take in all those details that might otherwise be a blur, or fade before we can admire them.

Great post, Cate! Now I'll be looking at my boot prints to see what's there. Lots of opportunity this year.

Anything unexplained is either god or the chupacabra.

Ideas are everywhere, Susan! But like the snow, can vanish if we don't capture them. :)

God and the chupacabra are only a few of the millions of ideas out there, Michael. And easier to conquer!

Writing things down is good but your reminder to stop and look is even better. Something we so often forget to do.

Paying attention to the details is what makes a super story. Good for you. I'm voting on it being the chupacabra. So much more exciting to consider than the deer, since we see those here all the time.

I encourage my teen writing students to examine life from a different perspective to get ideas. Sitting in the grass, on a curb, or even on the kitchen floor highlights a different angle that we might not think of. I agree, we need to get those thoughts down while they're fresh. Thanks for this, I needed the reminder!