The lesson of the sled 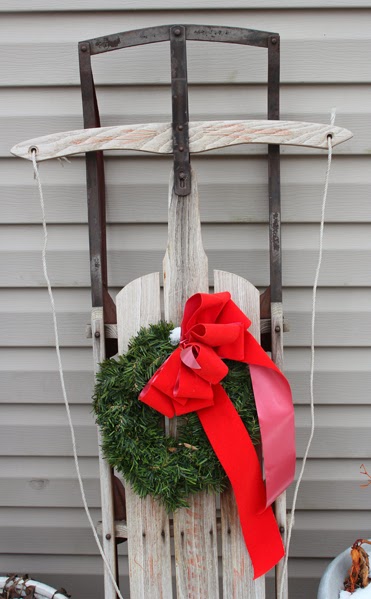 This is my sled. Sure, it's a holiday decoration *now*.  When I was a kid, it was my ticket to ride. To fly.

My sisters and brothers and I would drag our sleds about a quarter mile from our house to sled down a steep hill. Mini-mountain might better describe it. Sometimes at the bottom, we'd build a snow ramp so we'd catch some air (though we didn't call it that in those days, the term wouldn't be invented for decades to come).

We'd sled for HOURS. Pull the sled uphill, legs burning, until we reached the top. Take a moment to survey the slope, then position ourselves on the sled and *whoosh*. Down in much less time than it took to climb that hill.

But we kept doing it over and over and over. Because view from the top was so spectacular, made even better because we knew the thrill was coming. The trip down gave us such a rush. We didn't complain about the hill being too steep because that was the point of it - the higher the hill, the better the ride.

Nor did we complain about our sleds being too heavy - about 25 pounds by my husband's estimate. It must have been taller than I was. It stands up to my shoulder now. These days when I pull it out of the basement to set it outside, I always think 'Wow, this is heavy. How the heck did I manage to use it when I was a girl?'

For one, in the Sixties, the Flexible Flyer sled was probably state of the art, lol. And because when we're kids, there's a clearer goal ahead - the fun. Words like "impossible" held no place in our worlds because we challenged everything and turned impossible on its head.

And it was so worth it.

I admit, at some point years later, we traded in these heavy runner sleds for the plastic saucer-type. But it wasn't quite the same. Maybe I'd outgrown the whole thing, or thought I did.

Not hard to guess how this applies to writing. Just do the work for the prize at the end, and because you love it - ups and downs alike.

I put the sled back in the basement until next winter, but I'll try to keep the lesson fresh all year.

Enjoyed this post. I made my husband paint my old sled. Those were the days.

What a great post! Lots of disgruntlement in my neck of the woods today about which districts are closed and which aren't. Thanks for bringing back the joy that comes with the inconvenience.

This post brought back some good memories of snowy days and my own Flexible Flyer. Thank you.