911: A Day Worth Remembering 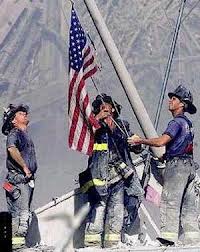 I remember that day. I was gathering items
of clothing, placing them in a bag to take to goodwill. My daughter was with me, so little then, her fairy tale eyes saw no evil in the world. It was all about princesses and
dress-up and barbie dolls. Dragon Tales was the episode of the morning.  Then I called
my mother.
"Are you watching the news?"
I never watched the news that time of
the day, but I switched channels and there it was: A burning tower. Shocked and unable
to grasp what was happening, I became glued to the set, and to my friend and neighbor up
the street whose husband was at that very
time a pilot for USAir, on his way somewhere.
I never witnessed such silence, stillness in the air.
"Mommy, when are we leaving? Can we go to the park?"
You know the rest of the story. My friend's plane landed, and he returned safely home a few days later. And we all went back to work, a little more fearfully.
I knew in my heart that day that my children's world would never be the same. They continued to play as they always did not noticing the changes around them, or understanding the evilness behind the event.  And something sparked inside of me.
An idea, a thought.
It's not what people look like that defines a nation, it is how they live.
It wasn't until a trip to Yellowstone National Park that I put that thought to
words, and "The Yellow Stone" is the result. First published in 2006, "The Yellow Stone" is one of my many previously published short stories included in my
anthology, SPECULATIVE JOURNEYS.
To honor 911, I am having a FREE Kindle giveaway today and tomorrow.
You may read "The Yellow Stone," as well as eleven other short stories there.

This is a great nation we live in, and will continue to be.

Get your FREE Kindle version of SPECULATIVE JOURNEYS by clicking on
the title.

Visit my blog to read more about my writing here.http://tinacrone.blogspot.com
Posted by T. M. Crone at 11:08 AM

Yes it is a very tragic and haunting anniversary.

It's also my Dad's 77th Birthday, which is another tragedy as he's too ill with Alzheimers to enjoy his own personal celebration.
A sad day all round.

I remember that day with sadness, and I'm not an American. A tragic day for all of humanity.