On book titles and insecurities 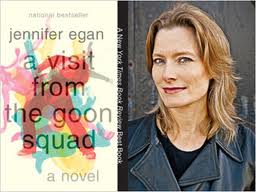 Jennifer Egan visited Carlisle a few weeks ago, and read the first chapter of her Pulitzer-winner, A Visit From the Goon Squad. I was thrilled she came to town. I don't know how Dickinson manages to book such amazing authors as her, Ian McEwan and Margaret Atwood, among others. And to make the events free to the public (exactly what I can afford).


Afterward, during the brief Q &A session (extremely regimented, actually - only five questions allowed), someone asked how she came up with the title. Great question. It's not exactly a grabber of a title, except for its oddness.


After publication, the story didn't sell well at first. She kicked herself for giving the book that title. But then, of course, it was nominated for a Pulitzer, boosting sales, and then awarded the Pulitzer, and the rest is bestseller history.


It surprised me that Ms. Egan suffered from such insecurities, being such an established author. Another surprise was the basis for the story - sparked from a real-life incident in which a woman left her purse, with wallet in full view, on the sink in a public rest room while she used the toilet. Crazy, but true. But I found it reassuring that a well-known author did this, as I've done it myself and felt like I'm pilfering, or my muse hasn't quite done her job well enough.


Funny story, though - Ms. Egan told how her own wallet had been stolen more times than she could recall, and had received a call from the credit card representative soon after her card was stolen. Ms. Egan shared more information with the woman only to learn that she was, in fact, the thief herself.


I purchased a copy of A Visit From the Goon Squad after the reading, and the student used one of those handheld credit card machines, sliding the imprinter over the carbon slip again and again. The numbers grew illegible, but I didn't argue. The next day, a woman called to ask me for my credit card number, and I was tempted to ask whether she was really an employee of Dickinson College, or someone who collected credit card numbers for her own gain. But as I'd left my  phone number with the girl, I gave her the number again. I'll be watching my account statements, though. :)
Posted by Cate Masters at 8:47 AM

Email ThisBlogThis!Share to TwitterShare to FacebookShare to Pinterest
Labels: A Visit From the Goon Squad, Jennifer Egan

Think we all have insecurity in one form or another, some are able hide it, and I'd certainly check that bank statement!

I stress over titles sometimes and sometimes they just come easily.

For me, too, Susan. It's great when they feel like that perfect fit, but oftentimes it's a struggle.

I am the worst when it comes to titles. It's easier to write the book than name it.

Occasionally a title will present itself toward the end of a story. I found it interesting she had the title, and the story tie-in presented itself later.

Sometimes a title will present it's for a WIP but then the story heads off in a different direction and I'm left with a title I love and a story that no longer works with it.

Then you'll have to do what Jennifer Egan did and craft a story around a title! :)