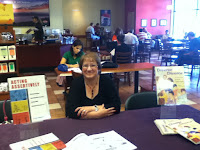 My blog photo makes me sad. When I first posted it, several months after a book signing at my local Borders, the only problem I had with it was that I had no idea who the lady in the background was/is, and I had no idea how to crop her put of the picture. Now, the problem is that the setting no longer exists. Our Borders has been closed for about a month.
As we stood waiting for a taxi outside Penn Station in New York last weekend, we couldn't miss the big, empty storefront where the Borders used to be. Shopping at a nearby mall last Friday night, I found a Books A Million where the Borders used to be. I lingered at the door momentarily, but didn't venture in.

At Target yesterday, I enjoyed browsing the well-lit, neatly arranged book section, which
seemed bigger than it had been before our Borders - just down the street - closed its doors. My daughter, who is a voracious reader - found quite a lot to pique her interest.
Trendy series and books by popular authors graced the shelves alongside works by authors famous for their writing skills as well as those famous for less literary reasons. We left with four books, which my daughter will no doubt devour within two weeks.

What then? As long as she wants to read the hot and trendy titles, we should have no problem keeping her bedside table well-stocked. And for the more obscure titles, well, there's always Amazon, or a half hour road trip to our closest Barnes and Noble.

But within five minutes of our house, there is a small, independent bookstore. When we first bought our house 17 years ago, this bookstore not only had a twin across town, but it also occupied a much larger retail space, with a beautiful - and beautifully stocked - children's section. Some time ago, however, its twin closed, and the store closer to o our home moved to a more intimate location. I don't remember whether or not this coincided with Borders' opening, but against all odds, this small, local store remains, tucked away in a strip mall, surviving with less than half of the space, stock and clout that Borders
had.

And as much as I know how this blog should end - with the loyal, local author reformed and making her purchases at the underdog bookstore - the bottom line is that the number of books we purchase makes this conclusion unlikely. Has the demise of Borders awakened my sense of duty, nudging me to make sure that at least some of my purchases are transferred to this independent bookseller? Yes. But when Target and Amazon discount their books, and Barnes and Noble sends me coupons, it's tough to plunk down full cover price in a small store that will probably have to special order the title I want because their inventory is so small and select. And they can't afford to make that inventory any larger because even people like me, who recognize the importance of their fiesty little business are turning to giants like Amazon because they ship books to my doorstep.

I don't know what the answer is. As much as I hate the fact that the whale that swallowed up so many small bookstores has now sunk into the depths of the retail sea, and as much as I champion - and admire - the minnows that remain, buying all my books as full price special orders just isn't going to happen.

So talk to me. Please. Tell me what your answer is, because while I know I will make a renewed effort to visit that miraculous minnow of a bookstore, I know that all of my purchases won't transfer there.

Not as long as there are discounts and door-to-door service.
Posted by Lisa Lawmaster Hess at 7:55 AM

Email ThisBlogThis!Share to TwitterShare to FacebookShare to Pinterest
Labels: Books A Million, Borders

I have been saved from this dilemma, although not the way I'd like to be. Our town has lost its last indy bookstore. My off-line choices are B&N or stores like Target. My one stand against the creeping reality that is Amazon is I always try to buy my books at a "real" store, preferably B&N, first before I resort to online.

I cringe because all the reasons you gave to buy other places than the smaller bkstores is true for me too.

And I love our small, independent bookstore near us. Love the browsing & selections of various items you can buy. Love that they call me by name & always ask about my writing. What big stores do that?

Miss them going out of business . . .

I am very saddened by all the bookstores closing, especially the smaller, independent ones. However, I've heard from a reliable source that BOOKS A MILLION is going into our empty bookstore front in the Susquehanna Valley Mall in Selinsgrove. Hopefully, they are going into the Lycoming Mall too.

In some ways, this also reminds me of the fight to be environmentally responsible. Sometimes throwaways are cheaper and easier. Not that any bookstores are throwaways....

Marsha, I have very fond memories of the Susquehanna Valley Mall, so I hope that a bookstore relocates there. Bucknell's B & N University Bookstore also leaves me with mixed feelings, but at least it's a book source.

I don't have an answer for you, dear. When you get a check as a Christmas or bd gift, use it to buy a book at the minnow store, to help keep them in the ocean.

I wish there was an independent store near me, but like you I couldn't afford to spend all my book dollars there. I miss my Borders alot. Even though I like reading ebooks, I miss the easy browsing of a print store.

Reminds me of the Meg Ryan and Tom Hanks movie "You've Got Mail"... Several of the bookstores (especially Christian ones) have been closing down in various cities of California. The stores that are still open are ones who offer great personal interaction with their clients and competitive pricing. Also noticed that second hand bookstores are doing great business!
John
http://community321.com

Yay, John - you got it to post! Thanks for trying again!

It reminded me of the movie, too, which is part of why it makes me so sad. Thanks for bringing up second-hand bookstores - I do patronized one of those nearby - though that doesn't do much for author royalties, either...

I don't know the answer. I feel for the small store, but you make a valid point. They cannot offer me the discounts that I get with Amazon & the few times I have tried to support my small town local stores, they had to order my book anyway. It took much longer for the book to arrive than my free shipping Amazon books. It is a sad dilemma. I want to support the smaller stores, but I am on such a tight budget right now and I am not willing to limit my purchases anymore than the economy has already limited my book purchases. I know this sounds selfish and I will probably get some slack for even saying it.

This is an interesting & thought provoking topic. Sadly, I do not see the answer.