It’s Banned Books Week – how will you celebrate?

From Sept. 25 through Oct 2, Banned Books Week highlights the importance of our freedoms. As an author, I’m grateful for the intellectual freedom we’re afforded in America. Across the nation, cities have joined in the fight against censorship by holding events. 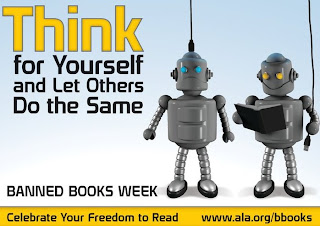 It’s surprising that even today, books are still being banned. One of my favorite authors, T.C. Boyle, made the list with The Tortilla Curtain. The Santa Rosa High School review committee limited its reading to juniors and seniors because they considered certain parts “provocative.”

This, when America ranks lower each year in global literacy? Seriously, how can students learn to think for themselves if others decide what they should and should not read?

Here are some accounts of attempts to ban books.

Four members of the Christian Civil Liberties Union filed a lawsuit seeking $30,000 each, claming emotional distress simply because the West Bend, Wis. Community Memorial Library displayed a copy of Francesca Lia Block’s Baby Be-Bop. They called for the YA book to actually be burned in public. Thank goodness for the library board’s decision, 9-0, not to restrict access in any manner. 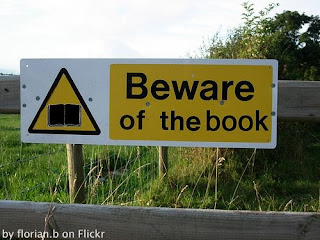 After a parent claimed the book promited “economic fallacies” and socialist ideas, a Pennsylvania school district banned even such a benign title as Barbara Ehrenreich’s Nickel and Dimed: On (Not) Getting by in America. A CYA move, disgraceful to say the least.


Here’s the complete list of books banned this past year.

These complaints makes me want to run out and read it for myself. Judge for myself. How about you?

How to combat this ongoing nonsense? The American Library Association advises us to be proactive. Stay informed. Several groups include activities designed to protect our First Amendment rights, including The Freedom to Read Foundation, The American Booksellers Foundation for Free Expression, The National Coalition Against Censorship, The Comic Book Legal Defense Fund, and the American Civil Liberties Union. Find them online, including Facebook, to keep yourself informed. 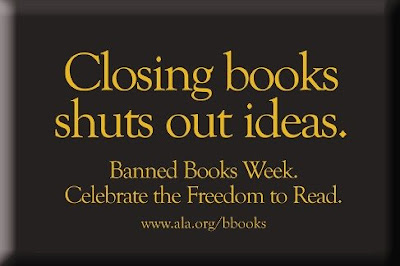 What should you do if you find an act of censorship? Report it to ALA’s Offi ce for Intellectual Freedom. All identifying information is kept strictly confidential. You can fi le reports online by going to www.ala.org/ala/issuesadvocacy/banned/challengeslibrarymaterials/index.cfm.

Most importantly, participate in Banned Books Week by joining in a local event, or simply by reading a banned book. The New York Times suggests a list of ten activities, if you can’t think of one yourself.

What have I done, you ask? Why, I bought a copy of To Kill A Mockingbird. I look forward to reading this classic, and to continue reading any book I choose.

Learning that some group somewhere has banned a book always makes me want to read it.

Most recently, I've read about the novels of Ellen Hopkins and Laurie Halse Anderson being banned from some school libraries. Seems to be a surefire way to be teenagers to read.

Funny how their protests have the opposite reaction they intended! Still, it's disturbing any group can shake a school board in their boots enough to pull a book from shelves. Maybe that's one advantage of ereaders - authorities can't tell what they're reading. :)

And I agree, Haleine. Makes me want to read the books when they're banned.